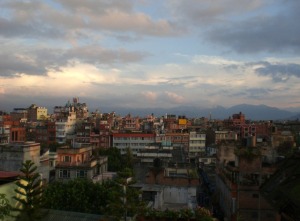 Today was a rest day.  We needed it for sure.  It seems like every day has been a huge adventure including hours in a car on rough (to put it mildly) roads filled with dust and pollution.  Because we did very little, I thought I would catch you up on Kathmandu in general and some overall impression from the trip thus far.

First, infrastructure.  Like India, there isn’t much here in Kathmandu.  We are at a great hotel but there is only power about 85% of the time and the Internet is glacial speed at best.  At least they have it.  The act of uploading photos has usually taken overnight for each day’s worth.  Painful, but were making it (spoiled Americans, I know).

Second, food.  This has been a highlight.  While we are in a very touristy area and things are relatively expensive, the food has been great.  After days of yak meat on the road, the first thing we did was hit a great Italian place and have a huge pizza (one each).  This place was good by US standards, not just because we were starved.  In fact, we went back the 2nd day just to make sure (pasta this time).  Tonight we had a big chicken curry on the roof of another great restaurant where we even caught a glimpse of the sunset.  Breakfast at the hotel even includes made-to-order eggs and pancakes if you want them, along with fruit (which we barely recognized after Tibet).

Third, traffic and the street vibe.  This place is crazy.  Near our hotel the streets are tiny, but cars, motorcycles, bicycles, and people somehow squeeze through them.  There is a great shopping/eating street near our hotel and it is filled with people trying to sell things.  The most popular items on offer: tours, taxis, and marijuana.  Every two minutes someone is asking “You want smoke?” or “You smoking?” or any variation you can think up.  This is clearly a dream place if you love the Grateful Dead, Bob Marley or Phish.  At night it seems to get quite hopping with live bands and clubs, but Ty and I haven’t been up past about 10pm on the most of the trip.  I guess we are getting old. 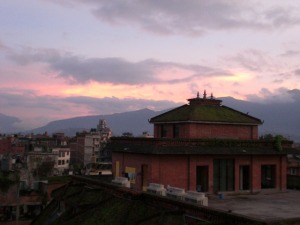 Fourth, the weather.  This is the rainy season and we had heard bad things.  Not so.  While it has rained every day, it usually does it late at night or only for about 30 minutes.  Frankly, our weather has been great for almost the whole trip (picture me knocking on wood right now).

Lastly, philanthropy.  It is everywhere and that is both good and bad.  We met a great couple at our hotel the first night who run what seems like a great organization.  They, partnered with another NGO, rescue Nepali girls that have been abducted and forced to join Indian circuses (because they look exotic).  Once rescued, they bring them back and re-integrate them by teaching them artistic tile skills (and helping them sell the finished product).  Some of their work is on display at the hotel and it is excellent.  Here’s the downside, and we heard it from them and Room to Read….  Charity is so prevalent here in Nepal that is has become a trade of its own.  People are literally capitalizing on people’s good will for profit and they are doing it in droves.  Fake charities everywhere or good ones being embezzled from, etc.  It sounds like an epidemic and a really hard one to combat, because everyone that comes here wants to help.

That’s it for now.  Tomorrow is a big day of sight seeing around the Kathmandu valley.  I’m sure we’ll be templed out again.  Oh, I threw some more photos up as well (see the photos section).