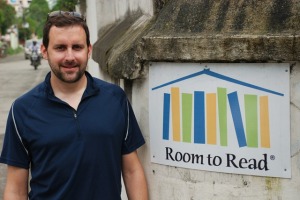 I have been waiting years for this.  I lived in Asia for 4.5 years and not only did I somehow miss visiting Nepal during that time, even worse was not seeing the school several friends and I donated in 2004 (completed in 2005) through Room to Read.  This school and Room to Read overall were not only a game-changers for me in terms of philanthropy, but it eventually led to me meeting my fiancé Sonya in Sri Lanka!  Still, I had somehow never been to see the school and a big reason for this whole trip was for me to finally check that box.

We met Arun (from Room to Read Nepal) at the RTR offices in Kathmandu and immediately drove for about 1.5 hours South toward Dhading.  Eventually we pulled to the side of the road, grabbed our cameras and headed for the hills (literally).  First step was crossing an amazing suspension bridge and then about 45 minutes of hiking in mud and rice fields up some steep hills to the school (glad we wore the boots).  It was blisteringly hot and humid.

I was a sweaty, muddy mess when I arrived but that was easily forgotten when I saw the reception.

Keep in mind that the school is closed right now because of the monsoon season, so theoretically there shouldn’t have been anyone around.  What we saw however, was about 50 students (in uniform) and about 50 parents, teachers, and community officials all lined up to greet us.  I have seen this before when visiting other RTR projects, but you can imagine the difference when a) it is your project, and b) you aren’t traveling with a big group that usually includes John Wood (RTR founder) and others donors.  They did this just for us.

I could write for hours about the experience, but in order to save you the pain I will summarize below and let the photos do the talking (they are all posted in the photos section of the site):

Thanks to Dominic Carr, Donna Hindson, Oliver Roll, Claude Brown, and Annie Bacon who were the other donors, and to Room to Read (Stephanie and Arun in particular).  More importantly, I want to call out my parents who provided me the education that made it possible to help these people with theirs.  Amazing.  Thank you.