First, what is the Friendship Highway?  From what we can glean, it is the road from Shigatse (where we stayed last night) and the Nepali border.  According to that definition, this is our first day on it (our second on the road from Lhasa).  Second, how friendly is it?  So far, with a few exceptions, very.  That said, things are about to change…

We awoke this morning in Shigatse to heavy rain which seemed unusual given how good our weather has been so far.  This is the rainy season, but we had seen very little until today.  We stared the morning with a fairly horrible breakfast at the hotel – an extremely diverse buffet gone awry – and then hit the local market in town in search of gifts.  We finally got Dikey to join us and help a little so that was good.  I was in search of a famous Tibetan guitar that hails from Shigatse but failed as nobody at the market knew where you could find one.  Oh well, one less thing to carry.

After that we hit the road, or so we though.   We had been told there were no temples on today’s path but next thing you know we are climbing the steps of yet another.  Don’t get me wrong – they are stunning and the history is amazing, but it does get to be a bit much.  The 4th Dali Lama did this here, the 7th Penchin Lama did this and built that, the 5th-9th Penchin Lamas were buried in this tomb, this is the past Buddha, this the future, this is the present, etc.  It all starts to run together and it might be all of the incense and yak-butter candles that are causing my allergies to flare up (still struggling with that), so we could really use a break. 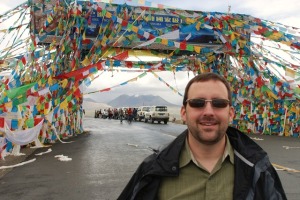 Finally we hit the road, which started out looking like the previous day, but then changed in some dramatic ways: a) the weather – we finally got some rain on the road, b) we finally saw the effects of mud slides we had read so much about.  There were huge sections of the road washed away and being fixed, the detours around which are interesting in themselves, and c) we went even higher than before.  Our highest pass was over 5200 meters and we only dropped down to 4600 to a tiny village called New Tigri which is where we will sleep (and where I sit writing this post that can’t be sent until our next Internet connection).

Oh, and I forgot to mention lunch.  While very tasty, this was our seediest dining spot yet.  As Ty said after returning from the lack of a toilet, “If we were with a large group, we would have lost half of them today.”  We had the best tea yet, along with some rice, potatoes and yak meat.  The other downside was the fly population.  They had us sitting next to a TV showing Chinese and Tibetan soap operas which evidently flys are really drawn to, by the hundreds.

To close out the night, Ty and I decided to take a break from the local yak-based cuisine and try a combination of something from a local groceries store (if you could call it that) and something from our own backpacks.  For new items, Ty went for the butter cookies while I opted to go salty with a can of look-a-like Pringles.  I chose poorly.  It turned out that they were tomato flavored.  Yuk.  I stole a couple of Ty’s cookies, ate another granola bar (thanks again Sonya!), and finished it off with a fake Life Saver for desert.  Now that is living!

Tomorrow may be our first chance to see Mt. Everest in the flesh.  It will require great weather which we did not have today, cut we are crossing our fingers!  Also, tomorrow will be our fist night in a tent because as Dickey suggested, “The guest house is too dirty.”  When a tent beats your guest house, I think it’s time for a cleaning crew.  Yikes!

One last note.  As in the previous post, we came upon another accident today.  Didn’t appear to be any injuries, but it was another great reminder to drive safe out here (hope our driver got the same message).  Photo below.