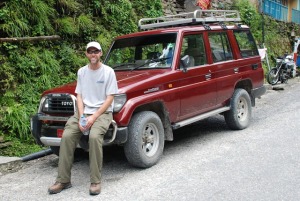 Ah, the last day of the Friendship Highway.  It was billed as a “cross the Friendship Bridge in Nepal, then a couple of hours drive into Kathmandu.”  I should have know better.  As with previous entries, here’s what really happened:

After a decent breakfast in our sub-par hotel, we loaded up the Land Cruiser one last time and headed for the Nepal border which was just a few kilometers away.  The border opens around 9:30 or 10am so we stood there waiting outside for about 40 minutes and then proceeded in.  Unlike most borders I have crossed in my life, all of the restrictions on this one were around “getting out” vs. “getting in,” meaning that the Chinese were extremely strict about letting you leave Tibet, including detailed searches of our bags and multiple checks of our documentation.  The most interesting part was what they were searching for.  At most borders it would be drugs or other contraband, but in this case it was messaging – they spent the most time during the search on our books, trying to figure out if they contained pro-Tibet or other illegal messaging that we might be trying to take into Nepal.

Once we finished the checks, we said goodbye to Dickey (our Tibetan guide) and found our Nepali guide (Mongal) waiting.  Nepalese are not allowed into Tibet and Tibetans aren’t really allowed to go anywhere except China, which was the reason for the switch.  Mongal then escorted us by foot across the friendship bridge into Nepal where another Land Cruiser was waiting with yet another driver.  First bit of information we got was “it rained a lot last night so there were some land slides – we might have some delays.”  Sure enough, within 5 minutes of driving we ran into a huge mudslide that covered the entire road.  No word on when a bulldozer would arrive to start fixing it – either way it would be a couple of hours minimum, so we returned up the hill to find lunch in the village.

Lunch was at a small hot springs along the river, where people (mostly truckers) pay to take showers and grab a bite.  It was dirty, but it worked.  The best part was talking with our new guide as he was a great guy and a wealth of knowledge.  The most interesting part was a clear container behind the counter that looked like something you would hold orange juice in at a hotel buffet (with a spout at the bottom).  Inside of it (we even went behind the counter to look closely), was a nasty selection of small lizards, snakes, and other things I couldn’t begin to describe, all fermenting into an alcoholic beverage that Mongal described as “scary.”  We would not be sampling this to confirm.

Eventually, we made it back to the mud slide a couple of hours later and the bulldozer had just arrived, busily clearing dirt and rocks while perched on a small cliff above the river.  30 minutes later the road was clear and we were the first to cross.  We passed about five more of these slide areas shortly thereafter, but they had all been cleared.  The driving was again quite treacherous.

The next major delay was even more exciting, and slightly nerve-racking.  Through conversations with other drivers, the word came through that in an upcoming village the night before, some police had beaten some kids (after suspecting them of trying to put nails in the road) and the village had decided to strike by closing the road with piles of rocks.  We were told they village people and police were “negotiating” and that the road would clear eventually.  After an hour of waiting in the blistering heat, they removed the rocks and we were on our way again.  Mongal told us this was completely normal – happens all the time.  Things are never boring on the “Friendship” Highway.

If you remove yourself from all of the mud slides and conflict, the valley and road are gorgeous.  Like the Tibet side, there are waterfalls everywhere and small villages dot the extremely green hillsides.  The river we were following had small suspension bridges (one even had a small resort run by New Zealanders offering bungee jumping from the bridge) every few miles and every free piece of land is covered with rice fields, corn, and soybeans in small shelves all the way up the hills.  Beautiful.

The lower we got in the valley, the more traffic we encountered, the hotter it got, and the population density started increasing.  There was also a large section where the dirt was extremely red with clay which was great mixed with all of the green of the jungle.  Eventually we entered suburbs of Kathmandu and things turned quite disgusting.  Dust and pollution everywhere.  Chaos.  Kathmandu is a very poorly managed (even for a developing country) city.  The roads and traffic are horrible.  All told, our “short drive” into Kathmandu from the border lasted nine hours.  Yes, nine.

We arrived at the Hotel Courtyard exhausted and hungry.  The last thing we wanted was another crappy guest house and we were pleasantly surprised for sure.  It is run by a great couple from Seattle (lived in Green Lake).  He was born in Nepal but spent most of his life in India and Seattle and she is American.  The hotel is the former home of his family (it is huge) and they have gone out of their way to make it a small oasis in an otherwise dirty and chaotic city.  So far, we highly recommend it.

We finished the night by joining the owners of the hotel and a few other guests at his uncle’s restaurant down the street, which was a beautiful place with great food.  Unfortunately it started with a shot of something you could only describe as moonshine.  At least it probably killed any of the bacteria we had floating around from the first two weeks of the trip.  Sleep came easy shortly thereafter…

Oh, and you can now see all of the photos so far!  http://roberthylton.spaces.live.com/photos