Our first full day in Lhasa is coming to a close.  We started the day at 7:30am by trying to find someone awake at our hotel (they had told us breakfast would be ready).  Finally we woke them and were soon eating omelets, yak butter on toast, and tea.  Dikey (pronounced Dickee), our guide, picked us up at 8 and we were off to see (and climb) Lhasa’s most visible monument, Potala Palace.  It 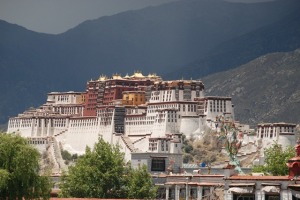 seems every picture of Lhasa includes this and it is easy to see why.  Perched on top of a hill in the middle of the city, this palace has 1,000 rooms (exactly) and was build by the fifth Dali Lama in the 17th century.  I won’t even try to describe it – the photos will do some justice to the outside and photos are not allowed on the inside (sorry – you’ll just have to visit yourself).

Following this adventure, we did some people watching around the palace (thousands of Tibetans walking to the palace with prayer wheels in hand – beautiful people dressed as they always have, except for a few modern Tibetans with baseball caps on sideways, etc.) and returned to the hotel.  Ty and I then ventured off for lunch and what would become the highlight of the day for sure.  At the suggestion of one of Sonya’s friends (thanks Amina!) we went to a very local noodle and sweet tea house and were met with many stares as foreigners.  Took us a minute to figure out how to order, but finally got some help from a couple of younger Tibetan men who asked us to join them.  They told us they were students studying English as we slurped down some spicy noodles with Yak meat and some sweet tea (similar to tea in India).

After some fun Q&A with them they invited us to visit their classroom (they were about to return themselves).  We were a bit nervous but it is hard for me to pass up a chance to “go local” and do something most tourists never get a chance to do.  Reluctantly, we followed them through a maze of narrow streets and eventually ended up at their school (relieved to find there was a school and they weren’t luring us into an alley to rob us – actually it is quite safe here).  They were so proud to take us into their classroom as special guests (and we were equally excited).  I mentioned to their instructor that Ty was a teacher and he asked him to get up and give a short lesson (i even got to help a bit).  It was amazing to interact with the students and when we were ready to leave they applauded and wanted pictures with us.  What a great event, especially for Ty (as a teacher, and on his birthday no less).

We were a bit lost at this point so we wandered the streets and markets of Lhasa for a few hours and finally found our hotel in time to meet Dikey again.  Our next stop was the Jokhang Temple, which is the holiest place in Tibet.  Built in the 7th century by the king for his Chinese wife (he also had a Nepalese and a Tibetan wife).  The most amazing things about Jokhang Temple are a) how old it is, b) how important it is to Tibetan Buddhists, and c) how good the view is from the roof!  The weather was just right over Potala Palace and the city of Lhasa that our photos turned out great ( I should have some posted soon but the internet connect is way slow here).

After Jokhang Temple we had dinner and then hung out in the main square.  I was trying to get photos of the people without them noticing (or offending them) so we sat in a corner of the crowded square and had some real fun.  Some of the Tibetans, especially children, are quite taken with foreigners so they will often say “hello” or “how are you?” and then giggle.  This was great fun and then got a bit strange.  To my surprise, a Tibetan monk (see photo to the left) walked right up and started stroking my beard, then giggled heartily, and then stood back and just stared (which is when I took this photo).  Best part is that he also had a beard – what was so special about mine? 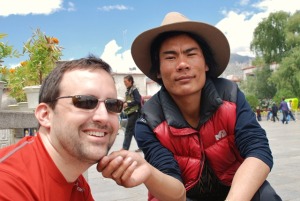 Eventually, he just walked away.  About five minutes later, another random guy walked up and did the same thing (see the photo to the right of him in action)!

We eventually returned to the hotel and hit the very limited Internet station while we try to sync our photos and video back to Seattle (it is taking forever).  At least I was able to arrange some chocolate cake at the hotel for Ty’s birthday.

One thought on “Monks and the Military – Lhasa, Tibet”