Following our inability to get to Tibet today due to entry permit date strictness, we spent the day around Beijing with our friend Jason Wu.  First, we finally didn’t have a busy morning.  Ty went for a run in the pollution and I slept in all the way to 8am!  After that we hit the bakery for a snack and one of Jason’s favorite tea shops for a morning drink.  We kept the breakfast to a minimum because brunch was coming soon.  Jason had said he was taking us to one of his favorite spots, and experience has told me that when he says this, you just go.

A short taxi ride later and we arrived at a complete dive with no English to be found anywhere (always a good sign) and framed pictures literally taped to the wall with packing tape.  Jason ordered and our food was delivered almost immediately.  Donkey tacos!!!  Wrapped in a Beijing pancake and stuffed with only the freshest of donkey meat and veggies, this was to be the highlight of our day. 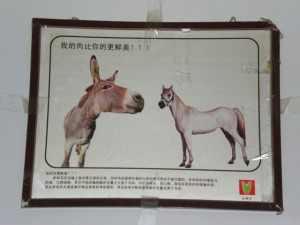 Might sound disgusting to some (or most) of you, but a) we have been in Beijing for a few days and it takes way more than that to shock us now, and b) they were excellent.  On the side we had two soups, one of the porridge variety and one made of donkey stock (with donkey meat and cilantro, two of Ty’s favorites).  Also a highlight was Jason’s translation of some of the pictures on the walls, all of which features various donkeys selling you on why they are better to eat than their competitors (horses, etc.).

Following this tasty treat, we headed into the Hutong district just in time for a famous yoghurt shop to open.

The line was already 50+ people deep, but again when Jason says it is good, you just go along.  We sat in the street eating our yoghurt and then made our way to the Lama temple, one of the few cultural buildings that survived Mao’s cultural revolution.  It was hot, but fascinating.  Probably the highlight was a 70+ ft tall Buddha made from a single white sandalwood tree (even made the Guinness Book of World Records).

For the afternoon, we finally got a chance to do almost nothing (first time on the trip).  We did laundry, transferred some photos, made a ridiculous video, and now sit here writing this post.  Next up, dinner with Will Zhao who is another friend from Beijing.  More to follow…

2 thoughts on “Donkey Tacos – Not Just for Breakfast Anymore…”