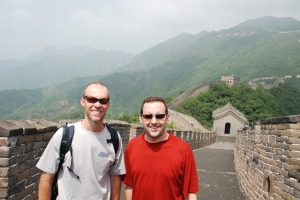 Following last night’s storm (lightning, thunder and rain through the night), the pollution and dust were relegated to the ground and sewers of Beijing and we were off the see the Great Wall.  It is a rare sight these days to have a relatively clear day and we took advantage.  We went first to the Mutianyu section of the wall, but before I go too far, let me tell you how we got there…. 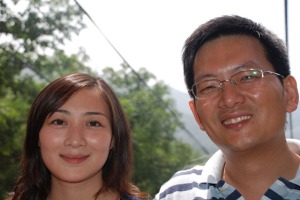 Howard and Kathy (their western names), his wife, are friends and at last minute they decided they wanted to drive us to the wall.  This was great for us given that our alternative was to take a taxi and basically figure it out by ourselves.  Like most things in China, relationships are essential.  To prove this, Howard is friends with Mr. Gu who happens to be the local repo man.  Mr. Gu has access to lots of cars as you might imagine.  We, in turn, were fortunate enough to get our pick of his latest stock to drive out to the wall (about 90 minutes).  In order to carry us big foreigners, Mr. Gu set us up with a Buick mini van.  The day had begun as only a day in Beijing can.

At Mutianyu, we took a cable car to a high part on the wall and then split with Howard and Kathy to make our own way (were were in need of exercise and they were not interested).  We climbed to the very top section (past a film crew and helicopter filming the latest Chinese blockbuster), which proved that Ty is indeed a real man (I had proven this myself a few years ago) and then made our way back across the wall in the searing heat.  All told, it was about 3 miles of climbing and walking.  The way down is a luge-like track (photos will be better than me explaining it). 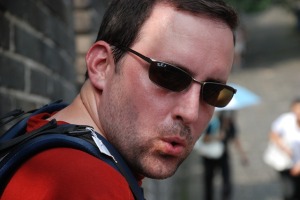 After this “touristy” part of the wall, we drove another hour to the “Wild Wall” or a section that has not been refurbished and commercialized.  It was in a beautiful valley full of restaurants famous for river fish (trout) because of the clean water.  Ty was gracious enough to catch us a fish (in a net, a tradition at these restaurants) which they then prepared for our lunch. 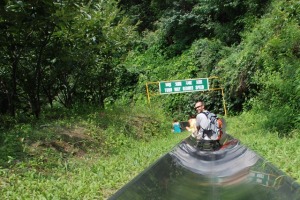 On the way back, Howard entertained us with a long joke about a Duck while Kathy chimed in to assist – as I keep saying, you can only get entertainment like this in China and you can’t pay for it – it has to come by accident.  Once back in Beijing we took a trip by the Olympic village, Bird’s Nest stadium, and Water Cube.

After what was already a long and eventful day, we piled back into Mr. Gu’s temporary Buick and went to a North Korean restaurant.  No, I don’t mean a North Korean “style” restaurant, I mean a restaurant with actual North Korean staff and ingredients (e.g. we had a fish that only exists inside of N. Korea).  This place has some sort of deal with the North Korean and Chinese governments that allow the staff to work and live here (under constant supervision).  The waitresses actually live in the restaurant and are only allowed to leave with an escort and only occasionally.  Amazing.  You can read another example here.  The food was great, and there was also a show (singing, dancing, etc.) that could only be called bizarre.  Add this to the list of very rare things I have been able to experience in my life.  A lucky man I am indeed and I strive not to take this for granted.  To that end, greetings and I miss you to Sonya and my family – you are the main reasons why I feel such luck.

Travel update: we were supposed to leave tomorrow for Tibet but were once again foiled due to regulations.  Our Tibetan entry permits are only good on the 3rd so we have to wait and fly on Monday.  Two more days in Beijing ahead…

BTW – Ty (my travel partner and a friend since I was five years old) is also giving his own perspective if you want to check it out.  http://tybrown768.spaces.live.com